A brand of ERLING

The German chocolatier Ritter hits a big marketing coup with its strictly limited “Unicorn chocolate”. The white 100g chocolate bar with rainbow glitter on its packaging was sold out with four hours after being available in Ritter´s Online Shop and the flagship store in Berlin. The idea was born online on the Crowd-Sourcing platform Sortenkreation.de. Consumers send their wishes for new creations and one of them was a Unicorn chocolate. Ritter followed that lead and created a triple layer white chocolate with black currant and raspberry pieces. Ritter itself didn´t expect the Hype. The company announced to check if there will be a second lot. 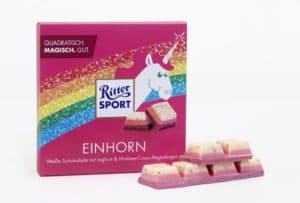